Excellent device, not sure why the low reviews. I had a 2nd Generation that I got from eBay and it failed so I said why not try the new device? It’s amazing!

Today, we’ll look at the all-new version of Fire TV, now packing 4K Ultra HD capability along with Alexa as a voice remote and controller for your smart home devices.

Methods of media consumption, particularly visual media, have changed significantly over recent years. Downloading or streaming movies and TV shows led to the sudden death of DVD rental chains while offering the end user more choice than ever before at a fraction of the cost. 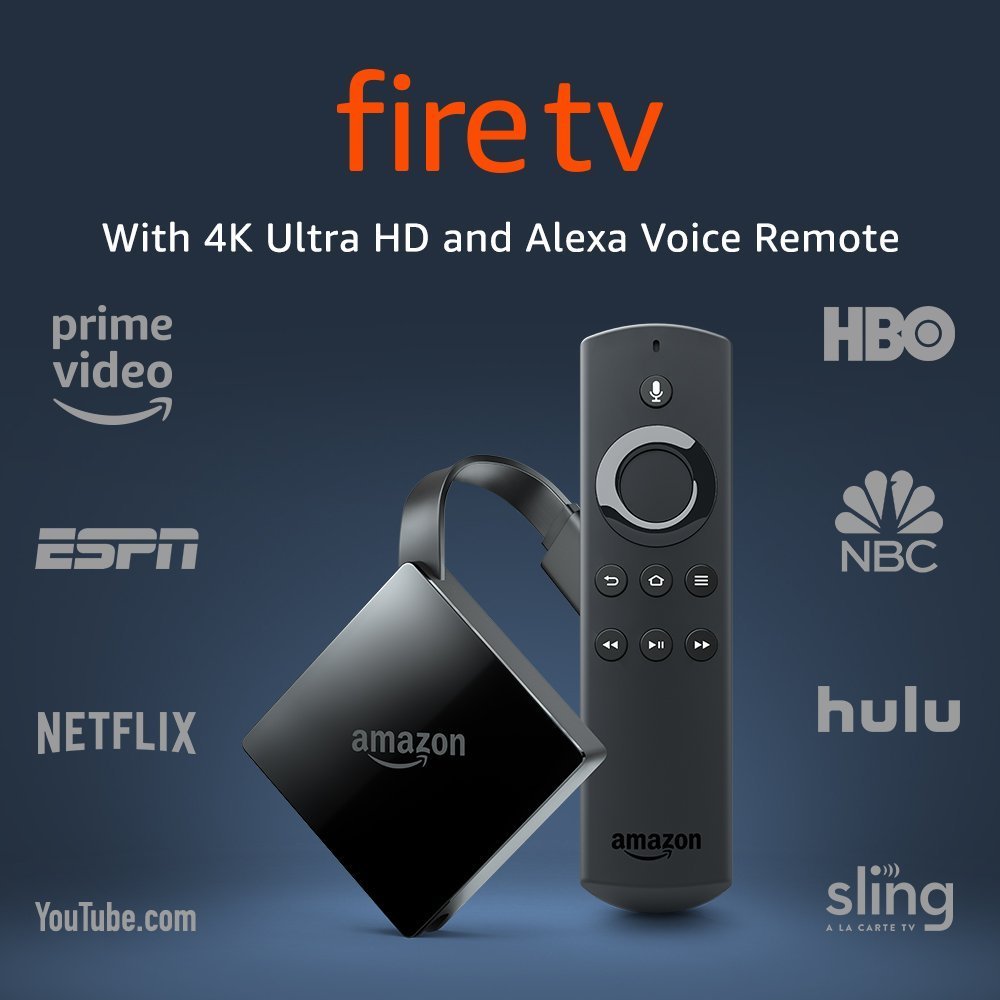 Amazon’s enhanced version of Fire TV is perhaps a response to Apple announcing a 4K HDR set-top box so how does it shape up?

The small, square unit with integrated HDMI cable plugs straight into the back of your TV or AV receiver. That means this dongle is essentially a 4K HDR alternative to the standard Amazon Fire TV stick along the lines of Google Chromecast rather than a set-top box replacement. Unlike the basic stick, though, this uprated device is a really hard-hitting streamer with plenty of frills.

Before we launch into a blow-by-blow synopsis of Fire TV, we’ll highlight the pros and cons of this eagerly anticipated media fiend… 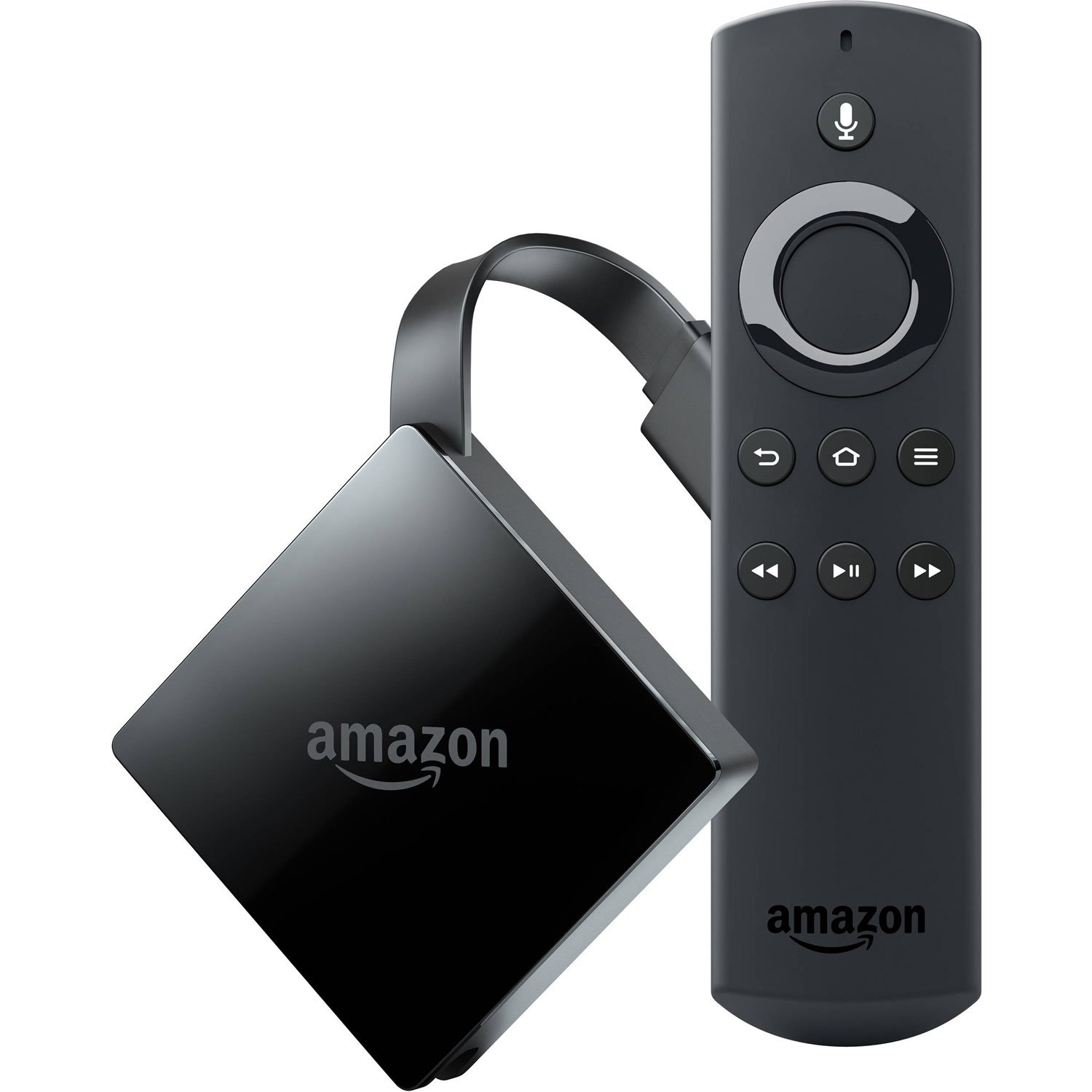 First thing’s first, you can get going pretty much straight out the box without any technical know-how.

We won’t labor the point here because that’s literally all you need to do. Fire TV is plug-and-play in its purest form.

What’s In The Box?

Here’s what you’ll get in the package:

Finally entering the mainstream, 4K serves up a razor-sharp screen resolution of 3840 x 2160 translating to an incredible 8 million pixels. You’ll get clarity, depth and detail that stomps all over standard HD sets and breathes new life into your favorite movies or TV shows.

Fire TV is fully compatible with 4K Ultra HD and also HDR TV so you can extract the most out of your new purchase via this miniature square device streaming at up to 60 frames per second. Note that you’ll only hit this frame rate with 720p or 1080p output. With a 4K UDH stream, it maxes out at 30 fps.

You will obviously need a compatible TV to achieve UHD playback. Beyond this, you’ll also an HDMI 2.0 connection on that TV. Make sure you’re aware of this to avoid disappointment. Forewarned is forearmed.

If you’ve just dropped a small fortune on a range-topping TV, you’ll appreciate the very competitive price of Fire TV. You can pick one up for less than the cost of a box set of movies.

The processor is a highly capable 1.5GHz quad-core beauty. Strictly speaking, this takes the form of 2 dual-core MediaTek processors. This means the chip is 75% quicker than that of the old model. Along with 2GB of system memory, you’ll enjoy rapid, glitch-free performance.

In terms of storage, you’ll get a relatively miserly 8GB but that’s not a deal-breaker. You can make use of the micro SD slot to expand up to 128GB and you’ll also get free Cloud storage so there’s no question of running out of room.

If you don’t have a WiFi connection or you prefer a more consistent stream, the Ethernet port is a nice touch. You will need to pay extra for an adapter.

Fire TV runs on FireOS, Amazon’s variant of Android’s operating system. This means the usual lack of Google Play and associated features but in place you’ll get Amazon’s own app store and top-tier ecosystem.

The home screen is an exercise in functional simplicity and the big images set against a black background allow you to see everything you need clearly without jumping up from the couch.

The WiFi remote is responsive and more than fit for purpose unless you start flicking through at full clip when it becomes a little jerky.

You might notice a few codec snags with content, particularly with the contents of your exisiting media library. This even happens with the gold-standard VLC media player so be aware that there are teething problems. That said, the most commonly used codecs are readily available and this minor bugbear is far from a deal-breaker.

The added kicker to Amazon Fire TV is its gaming capability. Invest in a Fire Controller and you can avail yourself of the more than serviceable games catalogue. The simpler games work using the buttons on the remote but for offering like Game of Thrones, the controller is money well spent for any gamer. Sure, it’s not going to replace your PlayStation or X-Box as a hardcore standalone device but it’s a great chance to play 3D games without spending a fortune.

Overall, we really can’t knock the performance of Amazon Fire TV. You’ll get speed, user-friendliness and a staggering array of content in impeccable 4K resolution at a price you won’t believe.

Exactly like Fire TV stick, the all-new Fire TV works with all the major players in the streaming world. From Netflix to BBC iPlayer, HBO to Starz, Hulu to Showtime, Amazon’s got your back. You can also access all the usual suspects like YouTube giving you an outrageous choice of more than 500,000 movies, TV shows and general entertainment.

Amazon Video is already available in 4K and, unlike with Netflix, you won’t be charged a premium for the privilege.

If you fancy some music, you’ll be able to stream songs from Spotify, iHeart Radio and Prime Music all day long.

Don’t have a cable or satellite TV package? Don’t worry! You can harness Fire TV using an HD antenna and grab plenty of free broadcasts from PBS and NBC. If you want to shell out for a package, there are plenty of options like Vue, Sling TV and PlayStation to keep you knee-deep in sports and live TV shows.

With all content, certain subscription charges may apply so conduct your due diligence and don’t expect everything to come pouring in free of charge.

Prime: A Must-Have with Fire TV

To get the most out of Fire TV, you’ll really want Amazon Prime.

With membership coming in at a very reasonable monthly fee, you’ll be able to unlock a whole host of movies and TV shows.

Prime members can bundle on a range of premium channels without being locked into packages full of channels you don’t want. There’s no risk either since they come with a free trial so you can see what you’re signing up for with each channel and buy accordingly.

You can cancel your Prime membership at any time without any niggles or headaches.

The new Fire TV seems Alexa Remote step up to the plate.

From searching content to asking for recommendations, from changing channels to fast forwarding and rewinding, Alexa is starting to make herself indispensable.

If you have an Echo device in your home, you can very easily pair it with Fire TV for the ultimate in hands-free control.

Alexa helps out with far more than your content needs if you have a smart home with compatible devices. You can monitor your security cameras, control the temperature inside your house and activate or dim lighting along with far, far more. And you can do all of this while slouched back watching a movie in 4K UHD. You can even get Alexa to order up a pizza to accompany your film!

This voice-activated remote is unlikely to be the driving reason for purchasing Fire TV but it’s certainly a fantastic extra. It won’t be long before all of us wonder just what we did before Amazon’s versatile digital assistant burst onto the scene.

You might be debating whether to opt for Fire TV Stick or the all-new Fire TV and that’s understandable.

Both are inexpensive but is the uprated version worth the extra money?

That depends on your needs…

With both devices, you’ll be able to kick back with Amazon’s enormous volume of original programs. You’ll be able to get your hands on pretty much the same third-party channels although Fire TV gives you slightly more choice here.

Gamers will get a marginally better selection on Fire TV.

The main difference comes for anyone who owns a 4K-enabled television. While Fire TV Stick peaks at 1080p, the new Fire TV supports an array of apps in full UDH resolution. If you have a compatible TV, the forthcoming Fire TV will give you full HDR support meaning you can savor your viewing in high dynamic range for impeccable contrast and a broader palette of colors.

If you want to take advantage of the 4K Ultra HD, there’s no doubt that the all-new Fire TV is the smart choice. If not, Fire TV Stick is a more than worthy alternative.

If you really want to extract the most from your new 4K Ultra HD TV and like the idea of Alexa running your smart home, investing in Amazon Fire TV is something of a no-brainer.

Here at Pick My Reader, we’re unfailingly honest when it comes to any product you might consider spending your hard-earned cash on. We have absolutely no interest in steering you toward any product that won’t fit your needs. With Fire TV, though, there’s practically nothing meaningful we can flag as a disadvantage while it offers the shower of benefits outlined above.

If you want to put your bleeding-edge television properly through its paces, Amazon Fire TV will not disappoint.