I’ll preface this by saying that I own an iPad, and was not expecting a $99 tablet to perform at anywhere near that level. I have followed the early reviews closely, and after seeing enough satisfied customers, I figured I’d give the Kindle Fire HD 6 a try!

As with all Amazon reading devices and tablets, each successive generation sees small but valuable tweaks. Kindle Fire HD 6 is no exception.

To clear up any confusion right from the get-go, this tablet is known interchangeably as Kindle Fire HD or simply Fire HD.

Fire HD has been around for half a decade now since its debut in late 2012. New models have been rolled out consistently and we’re now into the seventh generation of this neat little tablet. Fire HD6, along with Fire HD 7, is from the fourth generation. 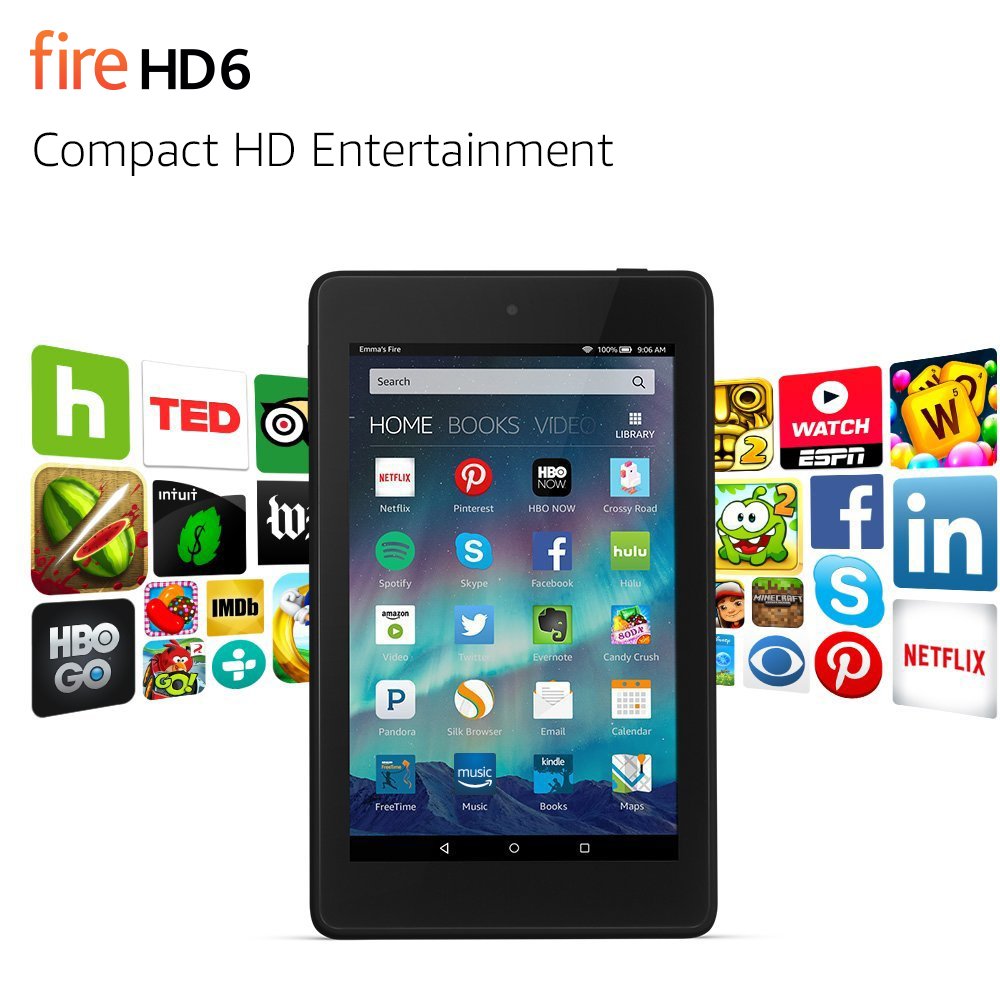 In today’s Fire HD 6 review, we’ll strip this starter tablet down to basics so you can see if it’s the right fit for you. Our role is simple: to guide you toward the best device for your needs.

Without further ado, we’ll lay out the advantages and disadvantages so you can see at a glance what it does best and where it falls short of the mark… 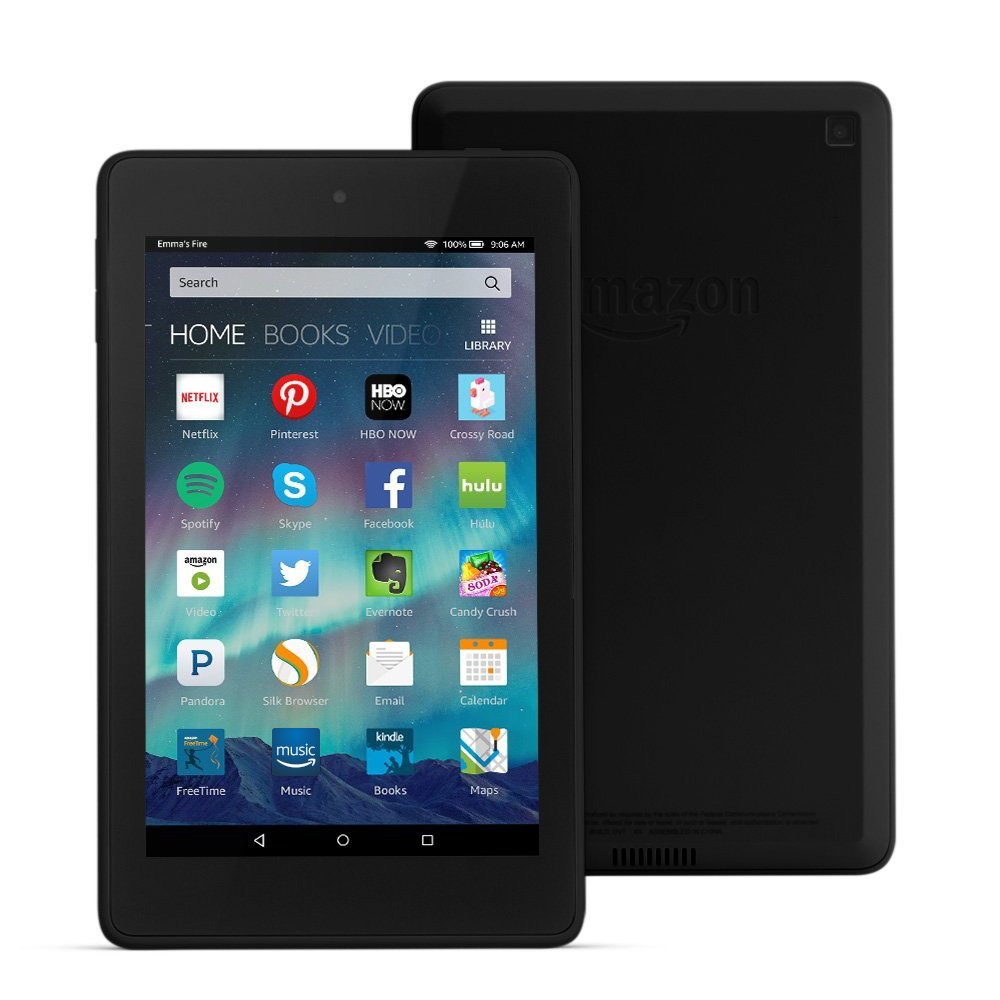 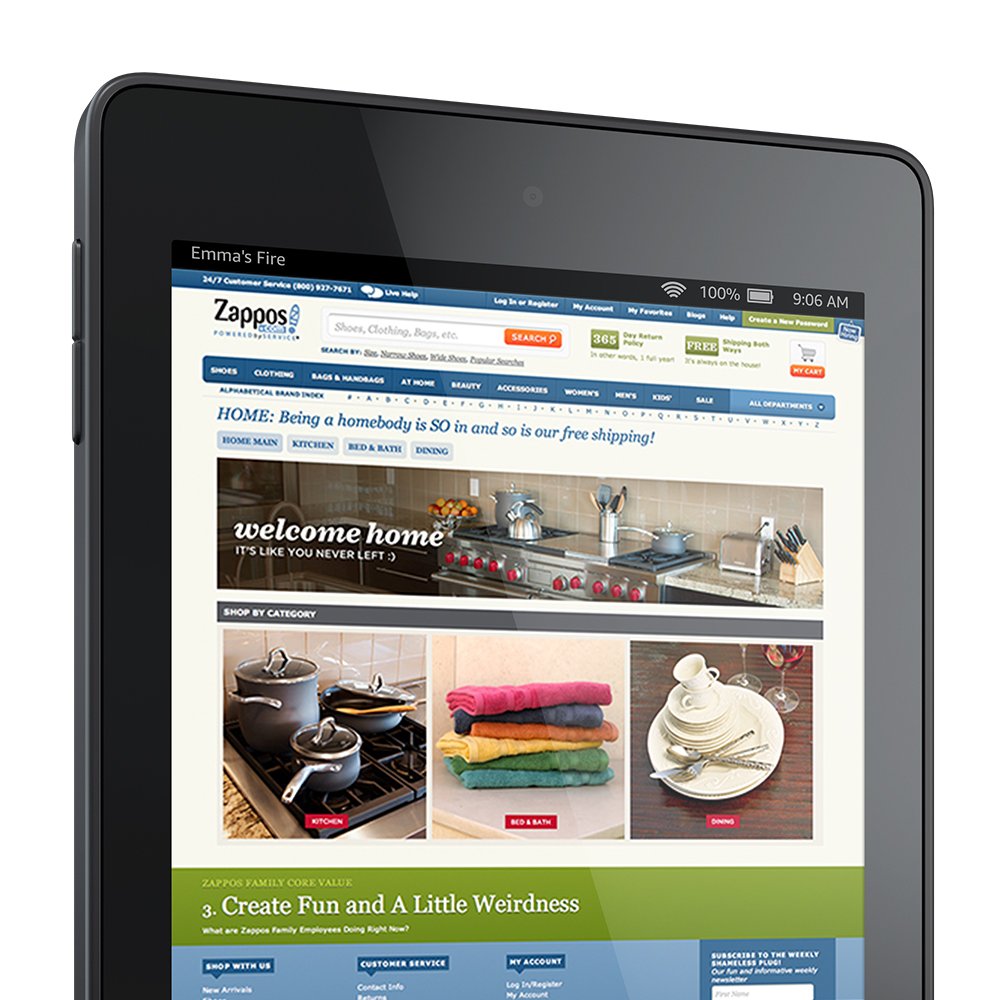 Who Is Kindle Fire HD6 Intended For?

It’s ideal for anyone who might fancy the idea of a tablet but isn’t prepared to shell out a couple hundred bucks for the privilege. As a starter tablet, you really can’t go far wrong with Fire HD 6.

If you are operating on a tight budget, you might be wary of buying a cheap tablet that sucker punches you and fails to deliver. While Fire HD 6 retails at a cut-throat rate, you won’t get stiffed by something unfit for purpose.

Not everyone wants a super-sized screen. If you travel frequently and you want something small but sturdy you can pop in your bag or even your pocket, this 6-incher is well worth considering. It’s also useful for anyone with multiple devices… If you want a larger screen, just switch to your laptop. For convenient one-handed browsing, pull out the Fire.

Finally, Kindle Fire HD 6 is also a nice way to introduce your kids to the world of tablets. There is a dedicated Kids Edition but the standard model is simple enough for most of today’s tech-savvy youngsters to use standing on their heads.

Unlike most monochrome Kindles, you can select from 5 colorways with Fire HD 6:

The smallest Fire, this dinky little device is pocket-sized and makes a great alternative to an upscale cell phone with a large screen. The difference in feel compared to a 7-inch screen is significant. It’s not only easier to carry around but also lends well to one-handed usage.

While the physical dimensions are small, it’s fair to say that it’s not the thinnest or slickest looking tablet on the market. This is one of those sacrifices you make when you’re getting such a bargain financially. At 10oz, it’s certainly no lightweight.

Finished in plastic, the body of Fire HD 6 is functional but certainly nothing to write home about design-wise. There’s also something of a gap at the rear so it’s not going to win any awards for aesthetics.

Buttons are fairly traditional in terms of design and placement. They jut out slightly from the upper edge. You’ll find a headphone jack, microphone hole and micro USB port at the top edge, too. Underneath, you’ll get the lone mono speaker.

Overall, Fire HD 6 is a reasonably attractive tablet that’s not over-designed but certainly stands out in the brighter finishes.

Aside from the different color options, you can choose between 8GB of internal storage or the more generous 16GB. Bear in mind that with the 8GB, you’ll only be able to use 4.5GB since the rest is eaten up keeping things running. Similarly, the beefier version only offers 11.6GB available for use.

If you run your tablets extremely lean, you might get away with the smaller capacity. We’d strongly recommend rolling with the 16GB version so you won’t feel restricted, though.

There’s no cellular capability so you are limited to WiFi only with Fire HD 6.

You can plump for a version with Special Offers giving you access to deals displayed on the lock screen or screensaver.

The 6-inch touchscreen packs quite a punch with an impressive 252ppi density translating to over a million pixels on screen in high definition. Resolution is a top-notch 1280 x 800.

Take into consideration, though, that this screen is very small for a tablet and go in knowing exactly what you’re signing up for. In return for the smaller screen, you’ll get sharper pixilation than a comparable 7-inch tablet serves up.

The screen is topped with Gorilla Glass so it’s rugged and built to go the distance. Sadly, this makes it very reflective so it’s not ideal for use outside in bright sunlight. You can use it outside but expect some glare.

The 16:10 aspect, as opposed to the more widescreen 16:9 on most 6-inch cell phones, means it comes across as having a larger viewing area by sacrificing a little portability.

Colors render very well, you can view with ease from all angles and the screen brings games and videos nicely to life.

You should get anywhere from 7 to 8 hours of use on a single charge. As with all battery statistics, there are too many variables to offer up a hard and fast guarantee. Obviously, streaming videos with WiFi on will deplete the battery quicker than if you’re offline and reading a book. You’ll certainly get more juice than most laptops offer and you should be fine with daily charging.

The real battery suck comes with gaming. With its quad core nature, playing games will reduce the run time by about 50%. It’s still not bad but something to consider if your main activity is playing Asphalt 8.

When it’s time to give Fire HD 6 a boost, you’ll impart a full charge via micro USB cable in around 6 hours.

Minor complaints aside, the battery life is more than respectable for a sub-$100 tablet.

If you think about the price tag, you might expect a laggy experience with freezing and sluggish navigation. Nothing could be further from the truth.

Thanks to that potent quad core processor, you’ll be able to slink around the tablet with ease. Web browsing is on a par with tablets weighing in at double the price.

There are few snags worth mentioning when it comes to downloading books. Watching movies is surprisingly seamless.

The operating system, Fire OS, is Amazon’s proprietary version of Android but it’s simply nowhere near as good. The interface doesn’t feel like Android and the general layout leaves something to be desired. You won’t find Google Play or Google Maps. There’s no home screen or widgets and the level of customization is minimal.

If you’re prepared to accept these limitations, where Kindle Fire HD 6 stands tall is as a pure content delivery system. Amazon Appstore and Kindle Store offer you a worthy substitute for Google Play along with a first-rate e-book store into the bargain. Amazon MP3 is an iTunes alternative. If that’s not enough, you can use Audible for audio books and Newsstand to cater for all your digital magazine needs.

Keep your expectations in check, go in primed for the restrictions and you might find that the operating system is a nice alternative to the worlds of Android or iOS.

Soft navigation keys are perhaps easier to get along with than the sometimes complicated gesture system on iPad and other tablets. Again, think about your own preferences rather than going with the herd.

While gaming performance will never trump that of high-end tablets, tests have shown the quad core processor outperforms many slightly more expensive tablets so that’s a pleasant bonus.

The good news is that Kindle Fire HD 6, unlike earlier iterations of Fire, has a pair of cameras.

The bad news is that they don’t exactly set the world alight.

At the back, you’ll get a simplistic 2-megapixel camera which is really not up to scratch.

The VGA front-facing camera is not much better. That said, although the resolution is deficient, you’ll get face recognition and serviceable photos if you take them indoors.

The images produced are somewhat grainy with a lack of detailing. Light can be an issue, too.

Overall, if you’re just looking to snap off a few playful selfies, the cameras are just about adequate. Be honest about what you need the camera for…

Are you likely to take out a tablet if you want to take meaningful pictures on the go? These days, pretty much everyone has a cell phone with a fairly useful camera and anyone interested in photography is liable to have a stand-alone camera anyway.

As with most aspects of a budget device, look at the bigger picture and appreciate what you are getting for the money rather than having unrealistic expectations which will lead to disappointment. This is why we are unfailingly honest with our reviews. We are not in the business of urging you to buy an unsuitable product. Quite the reverse. We’re here to help you get the best tablet for your personal requirements so forewarned is forearmed.

Is Kindle Fire HD 6 Cut Out For Reading?

Despite Kindle featuring in its name, don’t mistake the Fire HD 6 for a dedicated e-reader.

If you want a pure reading experience coupled with a super-light device, you’re much better placed checking out Amazon’s broad range of e-readers. Kindle Basic, Paperwhite, Voyage and Oasis all offer a superior reading journey.

Not everyone wants to be tied down to a device capable of little more than reading, though. Again, be prepared to take a hit in some areas to enjoy the full functionality of a tablet at an incredibly keen price.

The weight of the unit is one of the main drawbacks if you enjoy curling up with a book for extended periods. You can offset this by investing in a stand to take the weight off your arms. Like the cover, this is not included but considering the price tag of Fire HD 6, you could easily justify buying one. 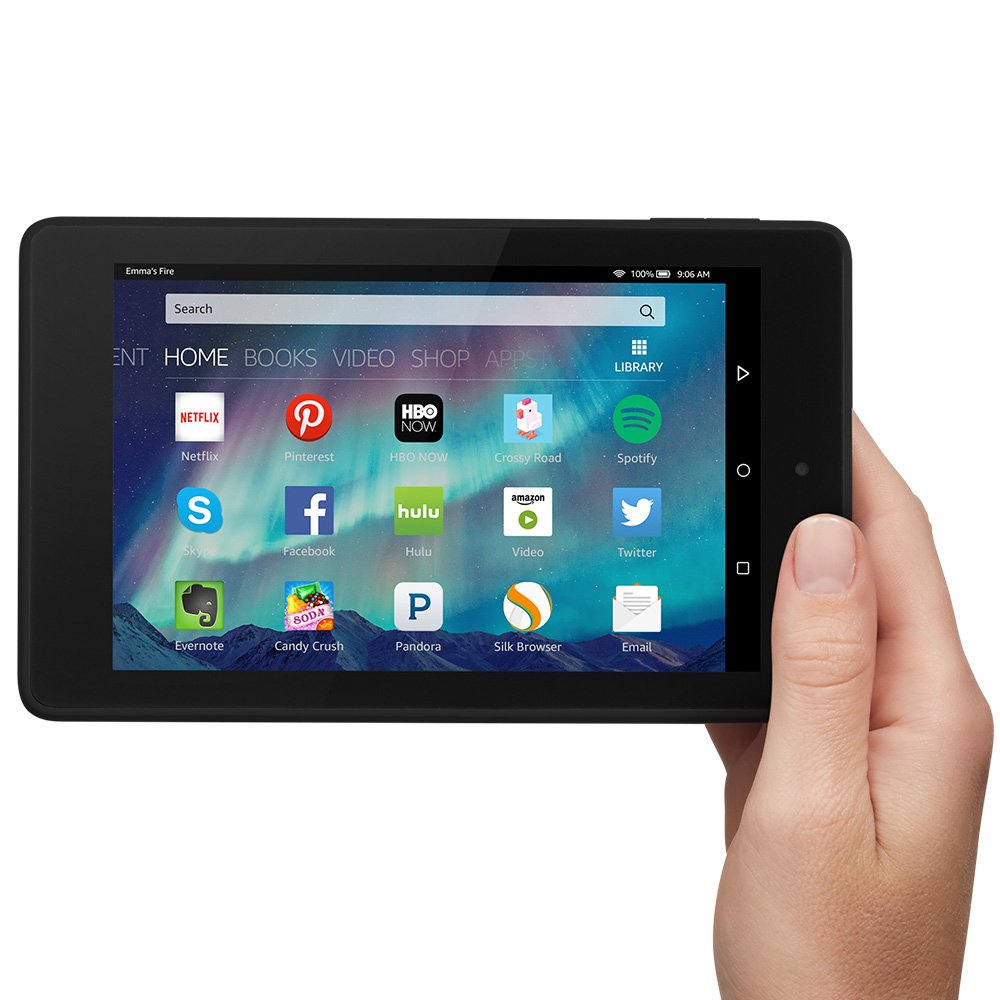 The other downside is that the backlit screen is prone to inducing eyestrain if you buckle in for a lengthy session.

As with all Amazon devices, you’ll enjoy unfettered access to the superb Amazon ecosystem. From e-books to magazines, newspapers to comics, you can indulge all your reading desires in a very cost-effective manner.

Since this is a tablet rather than an e-reader, it’s impossible to compare Fire HD 6 with Kindle Paperwhite, Voyage or Oasis. These are all designed expressly for reading with everything else falling around that core purpose. With Fire HD 6, you have a great deal more flexibility at the cost of a device that is not quite as strong when it comes to raw reading experience.

What Else Rates a Mention?

Before wrapping up, a snapshot of some other noteworthy features:

If you have used other more expensive tablets, Kindle Fire HD 6 might seem rather limited. It’s for this reason we haven’t put this model head-to-head with iPads or upscale Android tablets. That would be like comparing apples and oranges. What we can say is that iPad Mini is triple the price but certainly not three times better.

For anyone looking for a solid starting point in the tablet world, however, Fire HD 6 is a smart bet. You’ll get great overall value for money and perfectly respectable performance.

If you’re clear about what you want and expect from your tablet, this might just be the steal of the century.

Where can you find it?